3 of the Many Different Types of Snakes in San Antonio 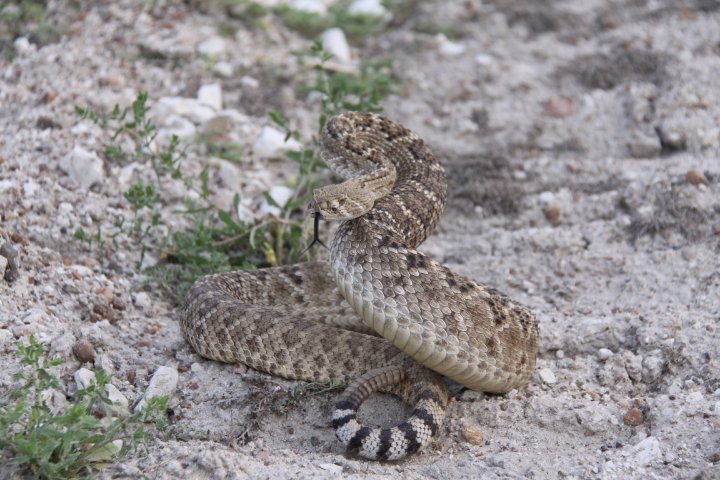 There are over 3,000 snake species scattered across the world. In the state of Texas alone, there are at least 115 known species if you include subspecies in your snake count. Thankfully, a considerable majority of these snake species are nonvenomous—a fact that is deeply comforting to Texan citizens. To get a general idea of the great variety of snakes the Lone Star State has to offer, here are 3 species of snakes in San Antonio—with each being just as unique and compelling as the last!

The Texas rat snake is surprisingly powerful despite its slim stature and can easily overpower small mammals and reptiles. Like other rat snakes in and around San Antonio, Texas rat snakes are regularly mistaken for venomous species like rattlesnakes and copperheads. Unfortunately, this means that these nonvenomous snakes are often killed because they are assumed to be a threat. However, while being bitten by rat snake species may cause mild pain and irritation, these species pose no immediate harm to humans. 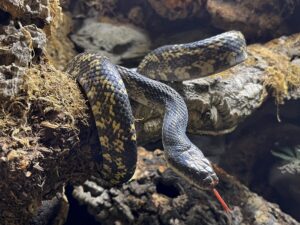 Another snake species that is incredibly common throughout Texas is the bull snake. Despite their large, intimidating size, bull snakes are nonvenomous and will only strike when provoked. While there are several different kinds of bull snakes in Texas, they tend to be quite defensive as a species and will do anything they can to intimidate potential predators—even when these predators drastically tower over them. Since bull snakes move slowly in comparison to other snakes in San Antonio, they rely on intimidating, defensive tactics to scare off potential predators. For instance, bull snakes are known to rear upwards to make themselves look as large as possible to appear like a viable threat.

Similar to many kinds of rat snakes in Texas, bull snakes are often mistaken for rattlesnakes since both snake species look quite similar and live in the same habitats. Rat snakes and bull snakes are known to rattle their tails like a rattlesnake to mimic this venomous species. One crucial difference between bull snakes and rattlesnakes is their dynamic colorings and markings. Bull snakes have splotchier patterns and are more muted in coloration. In comparison, rattlesnakes in and around the San Antonio area are more distinctly patterned and tend to be decorated with stripe or diamond patterns. This venomous snake species also greatly ranges in coloration, from dark browns to muted pinks. Although these differences are not readily apparent, you may just save a nonvenomous snake’s life with this knowledge!

Since rat snakes are one of the most common nonvenomous snake species in the entire region, it is crucial to remember that these snakes are not inherently harmful to humans. In fact, they can even be good to have around in suburban areas because they eat copious amounts of rodents like mice, rats, and other pests. This sentiment can also be applied to bull snakes, another nonvenomous snake species that is fairly common throughout Texas. Like rat snakes, bull snakes eat most rodents and can be quite docile, friendly creatures. For even more information on bull snakes in Texas, you can visit our website and learn about the Zoo’s snake-loving “Snake Farm” origins! You can also watch this video to learn even more about our wide array of slithery and scaly snake species!

Are Coral Snakes in Texas Venomous?

Interestingly enough, a snake’s size does not necessarily correspond to how viable of a threat it can pose to humans. While rat snakes and bull snakes in San Antonio are large and nonvenomous, the small coral snake is highly venomous. Despite only growing up to 3 feet, small yet mighty coral snakes in Texas pack a punch in the form of their dangerous venom. In fact, this snake has one of the strongest venoms of any snake species. However, no human deaths have been caused by coral snake bites in North America since the 1960s, thanks to the invention of antivenin. It also helps that these snakes are incredibly reluctant to bite. 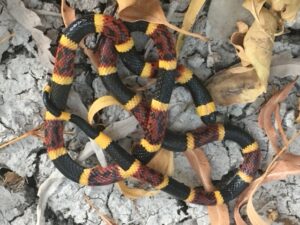 As our name and historic roots as the Snake Farm may suggest, Animal World and Snake Farm Zoo boasts a wide array of snake species. In addition to the Zoo’s notable diversity of snake species, we offer snake-centric events year-round. One of these events is our recurring Cold-Blooded Creatures feature show, which teaches our guests about a wide range of snake and reptile species.

Another notable snake offering at the Zoo is our Myths & Misconceptions Show. At this show we allow our visitors to get up close and personal with some of our snakes while learning about why these creatures are so misunderstood. It is our hope that we encourage our guests to appreciate these cold-blooded reptiles and teach them to tell the difference between venomous and nonvenomous snakes.

Follow Animal World and Snake Farm Zoo on Instagram for all the zoological updates you could ever ask for (and more)!