Our Favorite Jaguar Animal Facts To Celebrate December’s Featured Animal of the Month! 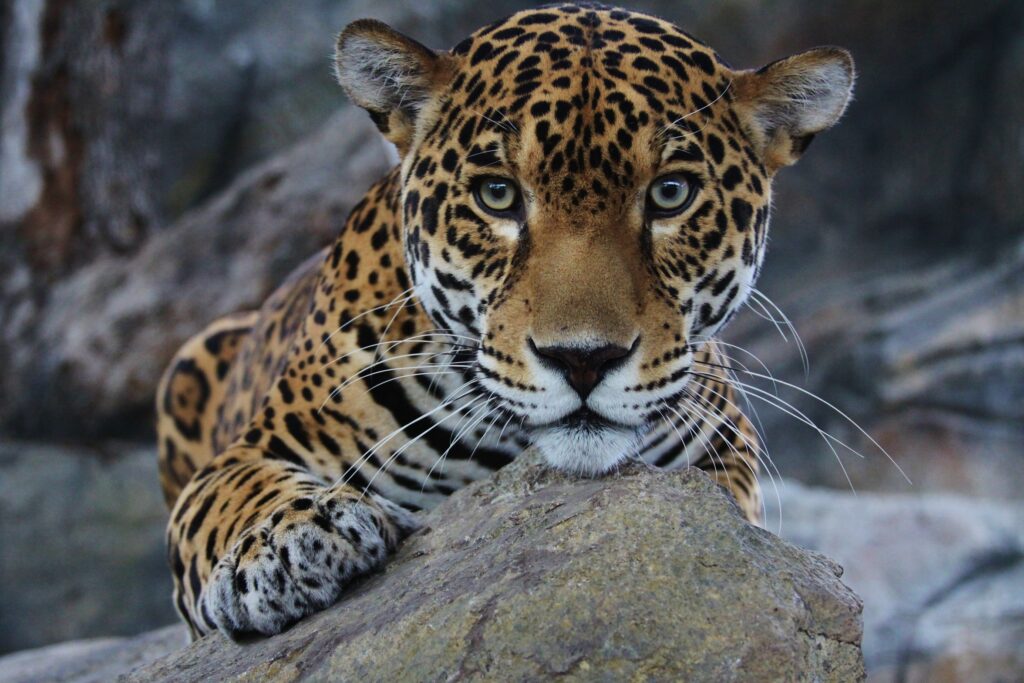 Throughout the month of December, Animal World and Snake Farm Zoo will be celebrating the majestic jaguar! In this blog, we will be sharing plenty of interesting jaguar animal facts that are sure to deepen your appreciation of these amazing animals. You might even come away with a new favorite jaguar fact!

Reserve your tickets now to experience our wide array of animals first-hand!

Many of our guests adore jaguars due to their distinctly patterned coats, but this is by no means the only thing that makes them unique! In fact, one of our favorite jaguar animal facts has to do with how they compare to other big cat species. Jaguars are commonly known as the largest big cat native to South America and the third largest big cat species in the entire world! Another interesting fact about jaguars is that they can live in an impressive array of habitats spanning North, Central, and South America. Even though jaguars are most comfortable in marshes and tropical rainforests, they can also be found in savannas and grasslands.

One jaguar fact that often surprises our guests due to how close our jaguar residents are is that jaguars live alone in the wild unless mating or parenting. Whereas animals like river otters and lemurs thrive within close-knit communities, jaguars only interact with one another during mating season and for the first two years of their jaguar cubs’ lives. Another amazing jaguar fact that our guests marvel at is that they are impeccable swimmers. Make sure to watch our amazing jaguar duo splash around in their exhibit’s waterfalls and running river during your next visit! While these facts about jaguar individuals merely scratch the surface concerning what makes them so unique, we hope they have sparked your interest in these amazing animals! 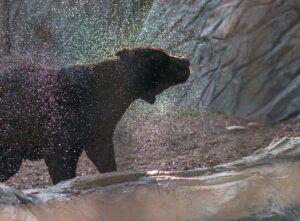 Let Us Introduce You To Our Black Jaguar And Our Tawny Jaguar!

Jaguars are commonly reddish-yellow or tawny and have black rosettes, but there are also melanistic jaguars (or black panthers) that have black coats and rosettes! This being said, we would like to take a moment to clear up a small misconception about “black panthers”— the term “black panther” is commonly used when referring to melanistic black cats, but black panthers themselves don’t really exist. While this color variation is more rare, one of each calls Animal World and Snake Farm Zoo home. Our tawny jaguar Mick is a laid-back, cool cat who enjoys taking naps and playing mischievous tricks on our zookeepers by moving around the furniture in his bedroom at night. Kiera, our black jaguar, is more outgoing and loves to play with Mick. The pair first came to the Zoo in February 2017. However, guests commonly assume that the jaguar animal pair have known each other all their lives due to their playful interactions and the care they show for one another. Be sure to stop by their exhibit and say hi during your next visit! 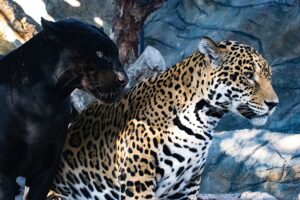 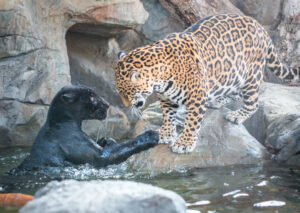 To better equip you for visiting these majestic big cats in person, here are some more facts about jaguars that will expand your growing knowledge of them. Did you know that jaguars have a mighty name that fits them perfectly? The word jaguar comes from the Native American word “yaguar,” which means “he who kills with one leap.” This leads us to our next fact about these formidable creatures: jaguars have the most powerful bite of any big cat, which allows them to prey on animals up to four times their own size! Since they are such great hunters, the jaguar animal diet consists of just about anything they come across in the wild. This long list includes— but is by no means limited to— deer, iguanas, birds, and even tapirs, the largest animal native to South America.

To wrap up this informational jaguar section, we would like to turn to facts about jaguars for kids! In doing so, we hope to cultivate an appreciation of these amazing creatures in even our youngest guests. As mentioned earlier, jaguars are actually great swimmers and don’t avoid water— unlike most cats! Since jaguars are skilled hunters, the fact that they primarily swim to hunt prey on aquatic animals like fish and caimans should not come as a surprise. Another fun jaguar fact that is sure to leave our younger readers in awe is that jaguars commonly climb trees! Even though jaguars are truly big cats, they often climb trees to get a better vantage point of surrounding prey and pounce at the most opportune moment. 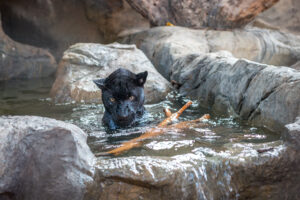 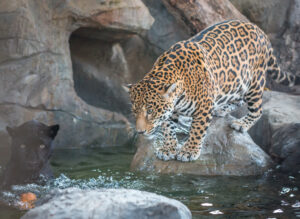 What Is The Ideal Habitat Of The Jaguar?

Jaguars are nomadic animals that can live in an impressive array of natural habitats, from arid scrublands to moist marshes. However, the most ideal habitat of the jaguar are tropical rainforests near small bodies of water like lakes and rivers. Unfortunately, these natural habitats are constantly under siege by deforestation efforts. This, combined with illegal jaguar hunting in many regions, has tremendously reduced the jaguar population. Because of this, jaguars are considered “Near Threatened” by the International Union for the Conservation of Nature (IUCN). However, zoos like AWSFZ endeavor to promote conservation and biodiversity efforts. In doing so, we hope to raise awareness about how these formidable creatures are gradually becoming endangered and need our help.

Since the longevity of all animal species is a serious matter, we aim to inspire our guests to appreciate these animals’ natural wonder and support local institutions so they can make positive change in any way they can. Our monthly animal features endeavor to do just that. Speaking of, let’s discuss even more jaguar animal facts that are sure to amaze! For instance, did you know that the black jaguar is commonly referred to as the black panther? Even though it can be easy to assume that the two terms refer to different animals, they are actually one and the same.

Another fun fact about jaguars is that they are prominently featured in the mythologies of ancient American civilizations like the Mayans and the Aztecs as symbols of strength. Given previously discussed facts about their strong jaws and impeccable hunting abilities, this makes perfect sense! These two additional facts are great facts about jaguars for kids, so be sure to encourage your little one to read this blog post and quiz them on their newfound knowledge! Now that you have learned plenty of impressive tawny and black jaguar animal facts, here are a few stunning black and white jaguar photos so you can appreciate their distinct coats even more! 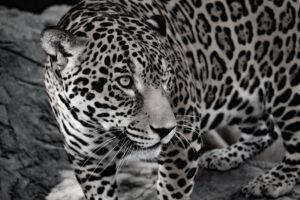 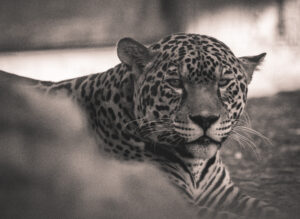 Leopard Vs. Jaguar: Is There A Difference?

Since we have already shared plenty of fun facts about jaguars, we can now discuss the most common question our guests pose to our knowledgeable staff— leopard vs. jaguar: is there a difference? While there is no difference between melanistic jaguars and black panthers, leopards and jaguars are completely different animals. The best way to distinguish a leopard from a jaguar is to closely look at their rosettes. A jaguar’s rosettes (left) have spots inside them, while a leopard’s rosettes (right) do not. 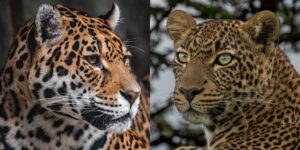 This can be hard to spot (no pun intended!) from a distance, but another surefire way to tell the difference between these two majestic big cats is to compare their body structures. In comparison to one another, jaguars have stockier, more muscular bodies and broader heads. However, since Animal World and Snake Farm Zoo doesn’t house any leopards, you will have to find another way to put this knowledge to the test! We hope you celebrate Kiera and Mick Jaguar with our animal-loving staff during your next trip to the Zoo!