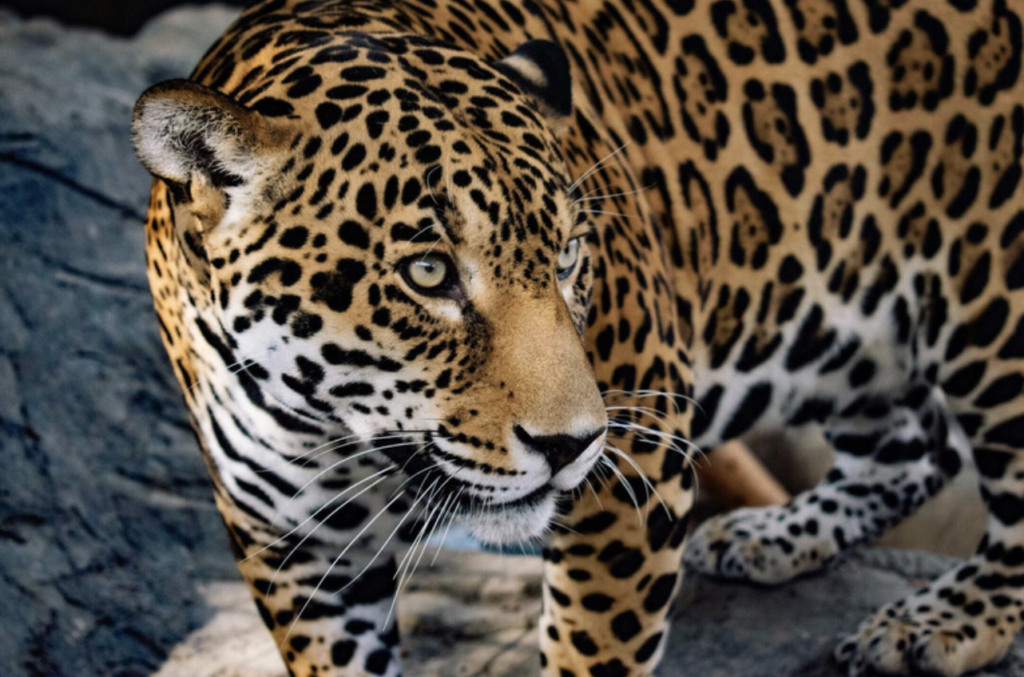 Animal World & Snake Farm Zoo’s featured animal for January is the largest cat in the Americas, the Jaguar! We sat down with Mammal Department Manager, Casey, to talk about these incredible animals, and answer some of the questions submitted by our Facebook and Instagram followers. 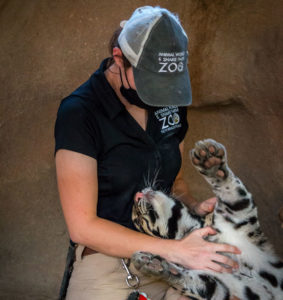 Before we get started talking about jaguars, tell our readers a little about you!

I’ve been at Animal World & Snake Farm Zoo for just about two years now. As the Mammal Department Manager, I oversee the care of all of the mammals and birds in the collection, but I primarily work with our carnivores and parrots. Before coming to Animal World & Snake Farm Zoo, I worked at facilities in both Arizona and Florida, mostly with carnivores, but also with a lot of primates and birds. Because my first ever zoo experience was an internship with carnivores, those have been my favorite type of animal to work with ever since. 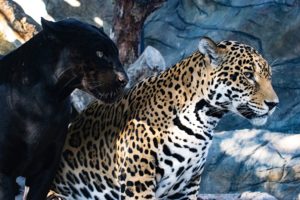 Who are the jaguars that live at AWSFZ?

Here at the zoo we have two jaguars — Mick and Kiera. Mick Jaguar is the more traditional looking jaguar with the orange coat and black spots. Kiera is the melanistic, or black-on-black jaguar. Although they look extremely different, they are still the same species and both fur colors occur naturally in the wild. In fact, the melanistic trait that is so intriguing to people, is actually a dominant trait in jaguars! 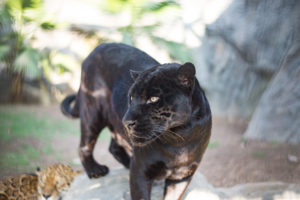 Kiera’s personality is extremely playful. She loves to climb the tree above their waterfall and people-watch. You can often find her playing soccer with one of their giant boomer balls or trying to wrestle with Mick.

Mick is much more laid back. His favorite thing to do is nap at the top of the rock wall ramp. When he’s not sleeping or lounging around, he can be quite goofy and even a bit mischievous. He loves rearranging the furniture in his bedroom at night, and I often find his bed platform totally flipped upside down! 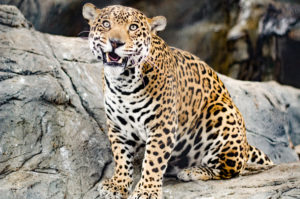 What does daily care look like for Kiera and Mick Jaguars?

When our staff first arrives in the morning, we check on all of the animals and make sure they are where they are supposed to be and doing okay. After I confirm that they are secure in their bedroom, I go out in their exhibit and clean. Once it’s clean and I’ve placed any enrichment I have for them, I’ll check to make sure that the exhibit is in good repair and that it’s safe for both the animals and the customers. When all of that is done, I let the jaguars out into their exhibit for the day. In the evening, we shift them into their bedrooms for the night. That’s also when they get their diet. 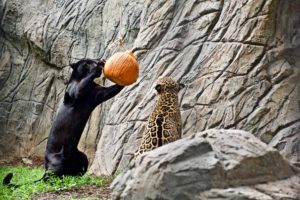 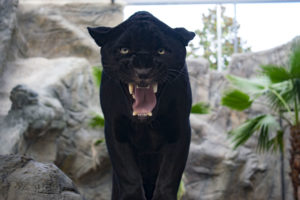 What do Kiera and Mick eat?

Being that they are carnivores, our jaguars eat meat! They usually get a mixture of chicken, beef, and fish. We also put a special supplement on their food to make sure they are getting all of the nutrients they need. Depending on the time of year, each jaguar eats about 3-4 pounds of meat each day. 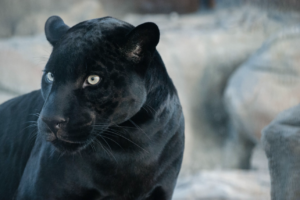 Are Black Panthers the same thing as Jaguars?

That’s kind of a tricky question. When people refer to “black panthers,” they’re usually talking about jaguars or leopards, because both of their scientific names start with “panthera” and both of those animals have the ability to be melanistic, or black. Sometimes people get that confused with mountain lions because another name for a mountain lion is a panther, even though they are not part of the “panthera” genus.

Another thing that’s misleading about the term “black panther” is that they aren’t really 100% black. If you catch Kiera in the right light, you can still see her spots. Melanistic technically refers to an increased amount of dark pigmentation in their fur. It doesn’t mean that they are solid black. 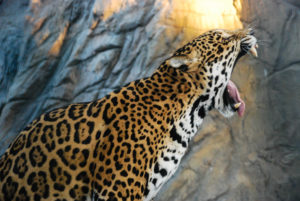 What’s your favorite thing about jaguars?

My favorite thing about jaguars is that they are extremely skilled hunters. They have the most powerful bite, relative to their size, of any other big cat. They can even take down prey 3-4 times their own size! I also love that they are one of the only species of cat that like to swim. Wild jaguars have been recorded swimming across the Panama Canal. 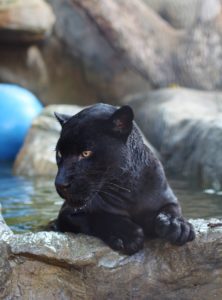