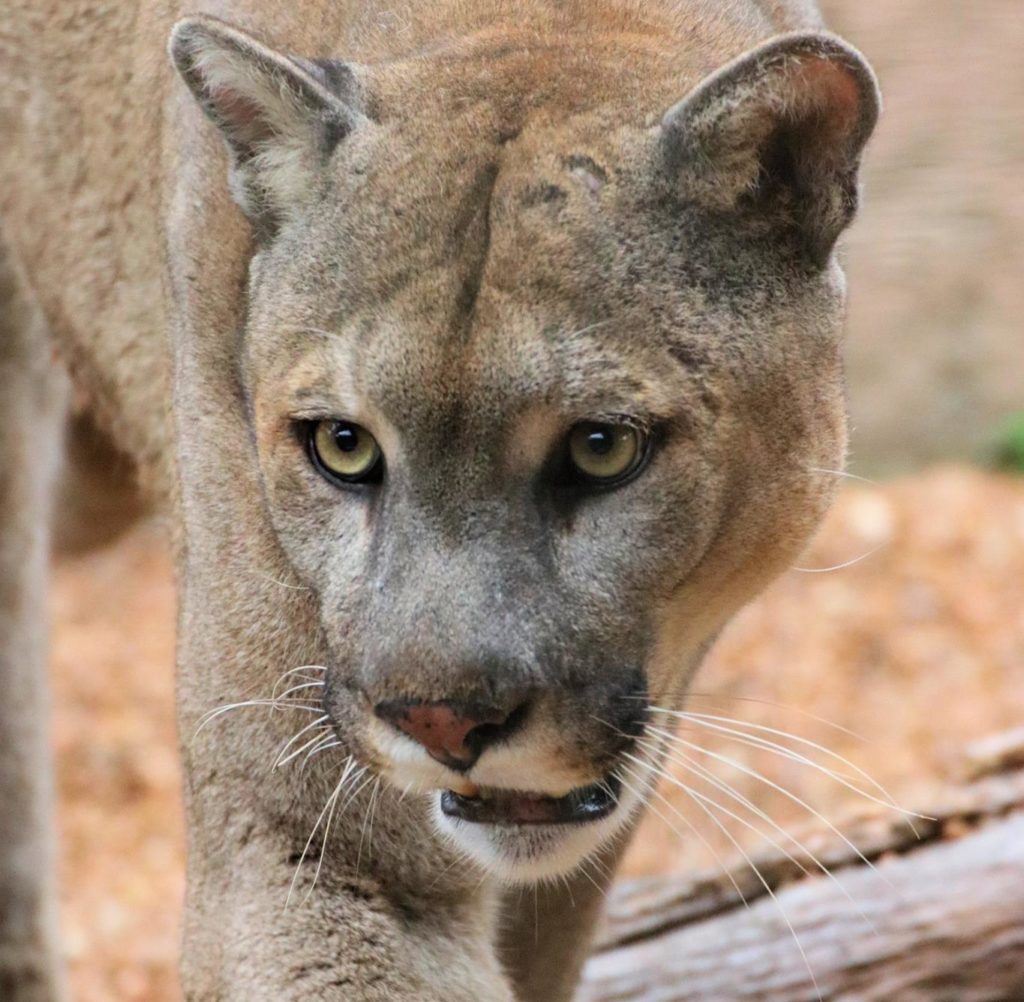 Over the last year and a half, our Animal Care Specialists noticed that our sweet, elderly mountain lion — Edward — was regularly limping on his front right paw. Because of the amazing relationship our staff has with Edward, we were able to give him a safe, non-invasive veterinary exam through the enclosure fence to take a look at his paw and see if there were any signs of an outward injury.

When it was determined that there were no external wounds on Edward’s paw, it was time to consult our lead veterinarian, Dr. James Rierson of Creekview Veterinary Clinic. Dr. Rierson explained that due to Edward’s advanced age, he believed that we were seeing early signs of arthritis. Although 8 years old doesn’t seem very old to humans, that is about the time mountain lions are seen as “geriatric” in terms of their growth and development. The average lifespan of a wild mountain lion is 8-12 years; however, it is not uncommon for mountain lions in human care to live into their late teens, even early twenties.

Edward was placed on a treatment plan that involved daily oral medication and new dietary supplements to help his joints feel less stiff. This new regiment had him feeling good as new again!

While the Zoo was closed during the COVID-19 Quarantine, we noticed that the medication wasn’t working as well as it previously was, and that Edward was starting to limp again. Dr. Rierson came out to give Edward a more thorough exam. This exam involved anesthetizing him in his enclosure while the veterinarian manipulated his joints and bones to check their range of motion and to see if there was anything else going on. While he was sedated, we also performed a brief dental exam and took blood samples to check on his organs. Dr. Rierson determined that the reduced range of motion in his front right leg was the result of his previous diagnoses – arthritis. Edward’s blood work looked great for a cat his age, so we were able to safely up his medication dose to help ease some of his joint stiffness. This helped get Edward back to his normal spunky self.

But as we approached fall, our staff noticed that Edward’s limp was back. For anyone who has arthritis, you know that cooler weather or changes in the weather can make your stiff joints feel a little more achy than usual. Dr. Rierson recommended that we get some x-rays on Edward to make sure that things weren’t getting worse, and that there were no new injuries. 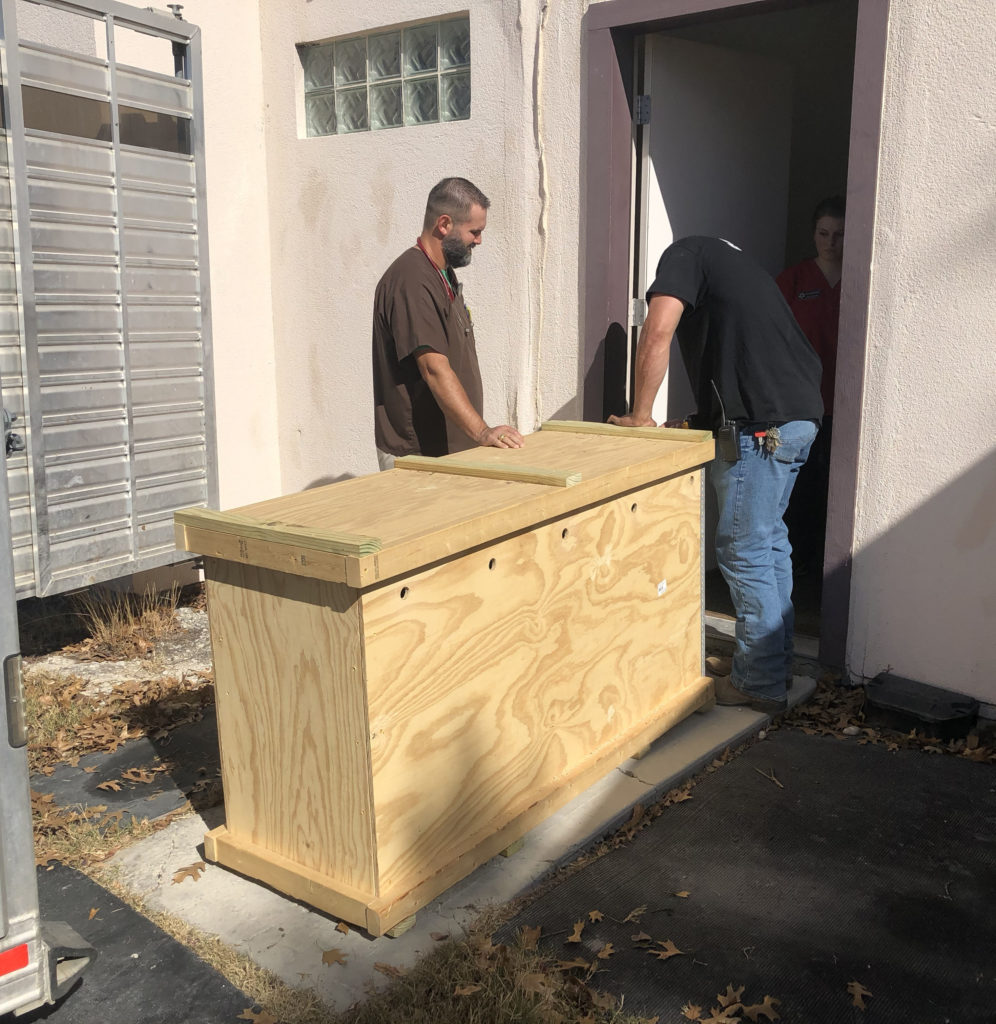 On November 20th, 2020, Directors Jarrod Forthman and Emily Jaffe, members of our Dangerous Animal Response Team who are trained in dangerous animal anesthesia, administered medication to immobilize Edward. Dr. Rierson and his Technician Supervisor, Colleen Mosqueda, arrived shortly after to help load Edward into a special transport crate. Once loaded, the team secured the crate and loaded it into a livestock trailer for transport to Creekview Veterinary Clinic. 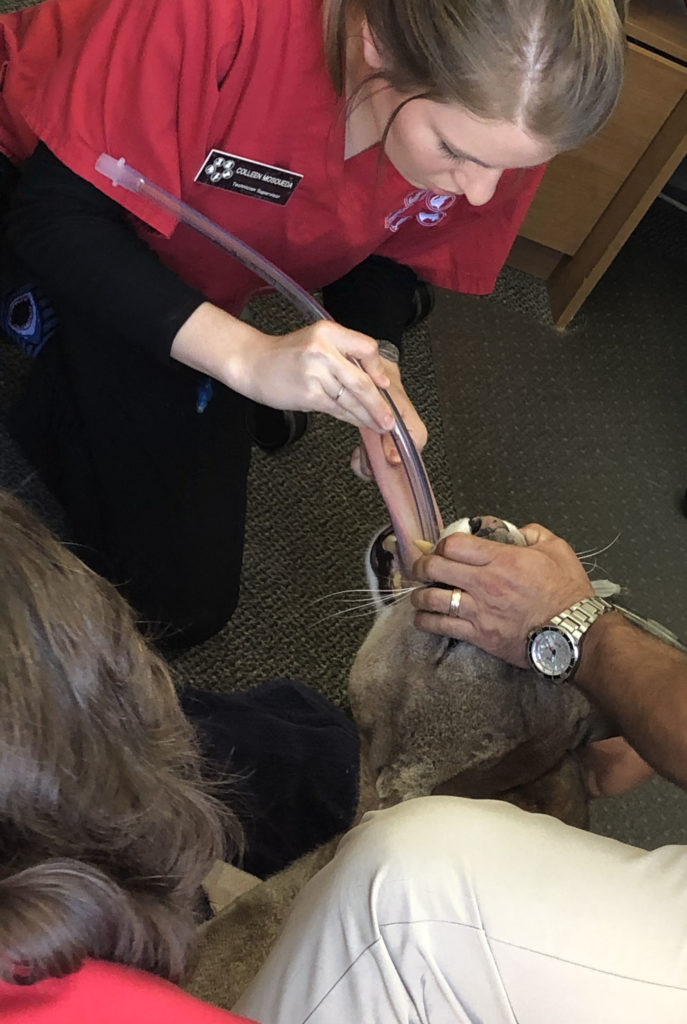 When Edward and the team arrived at the clinic, the staff at Creekview were waiting with the Sevoflurane machine, which would help ensure Edward remained safely immobilized while his exam took place. They repositioned Edward just right so that Colleen could intubate him with ease. 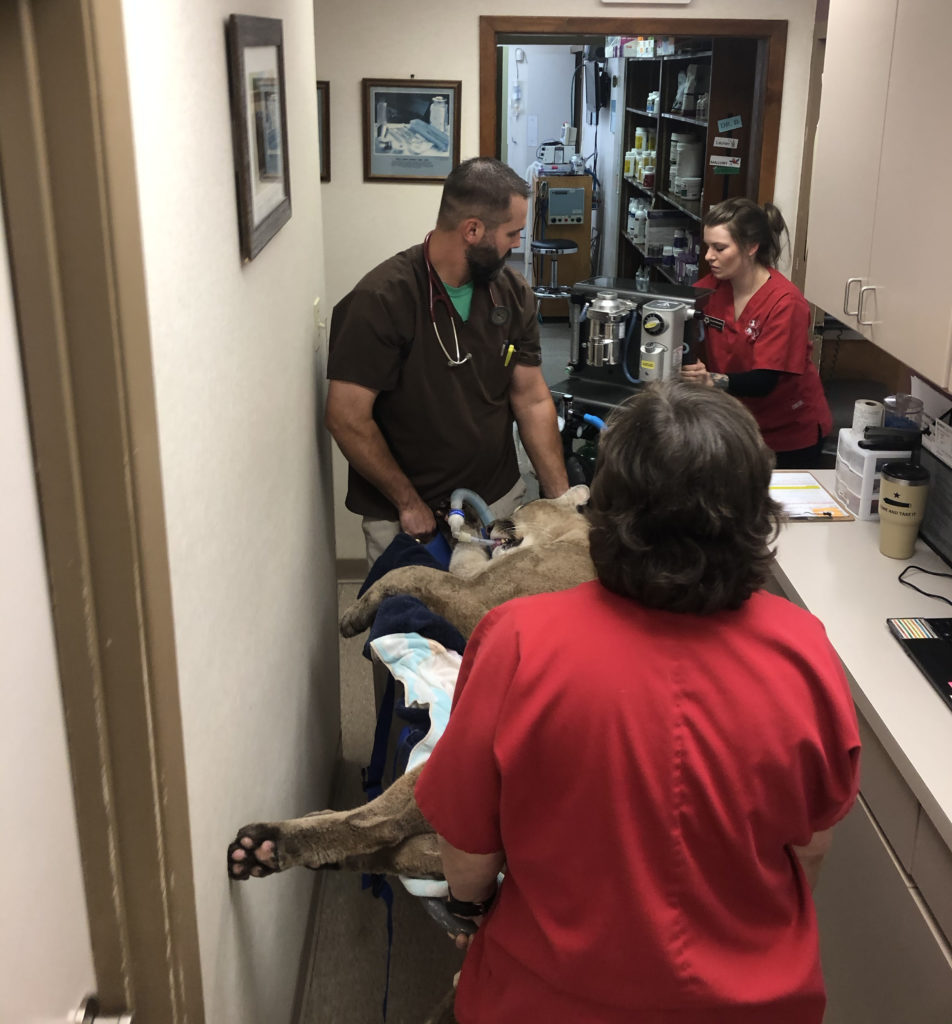 Once the endotracheal tube was in place, Dr. Rierson and Veterinary Technician, Vicki Lewis, carefully moved Edward into the x-ray room. One of the other team members, Taylor Nelson, was in charge of monitoring Edward’s breathing and heart rate so that adjustments to the levels on the anesthesia machine could be made. Veterinary Technician, Jasmine Giron, assisted Collen in positioning Edward on the x-ray table to begin the imaging process. They started with his front limbs and worked their way down. After the x-ray machine captured each image, it was instantly projected onto a large monitor for Dr. Rierson to see. This allowed the team to be able to make slight adjustments to Edward’s limbs so that the veterinarian could get the exact view that was needed to make an accurate diagnosis. 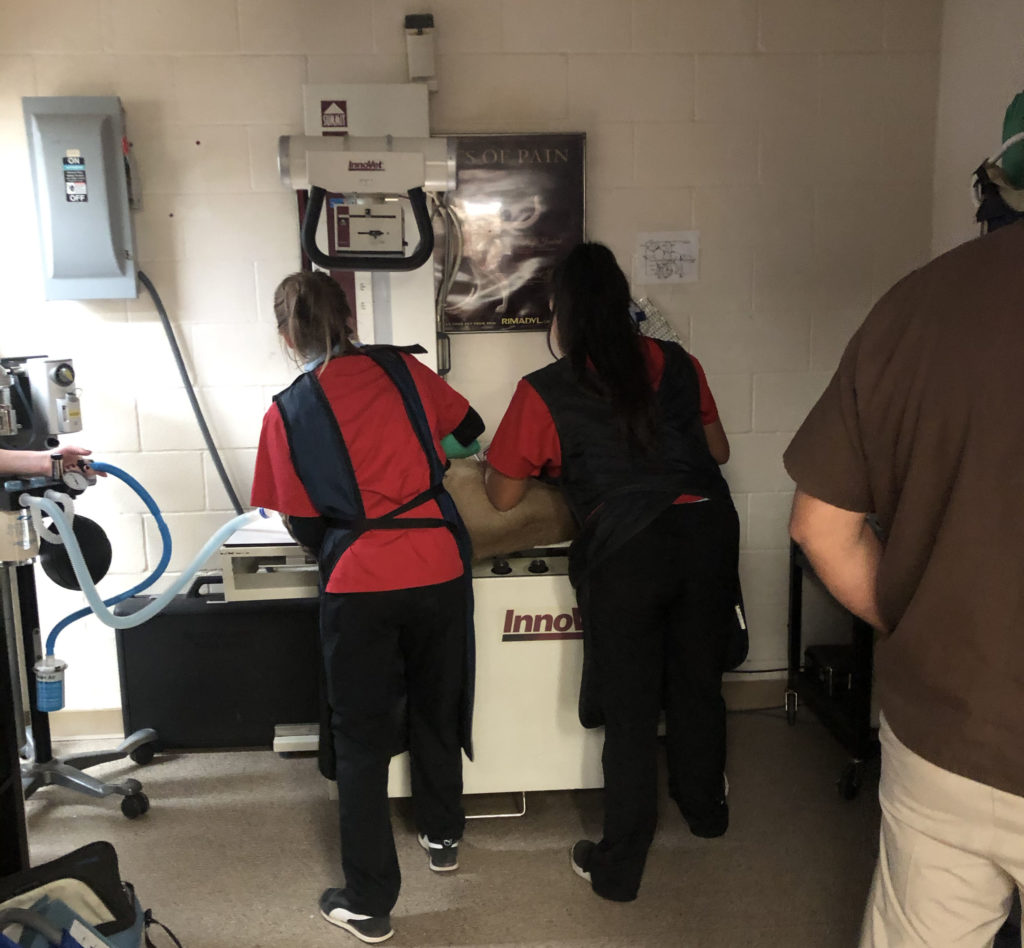 After the imaging process was completed for his legs, shoulders, hips, and paws, Colleen then drew blood to make sure all of his organs were functioning properly, and that Edward’s blood chemistry was within a healthy range for his species and age. 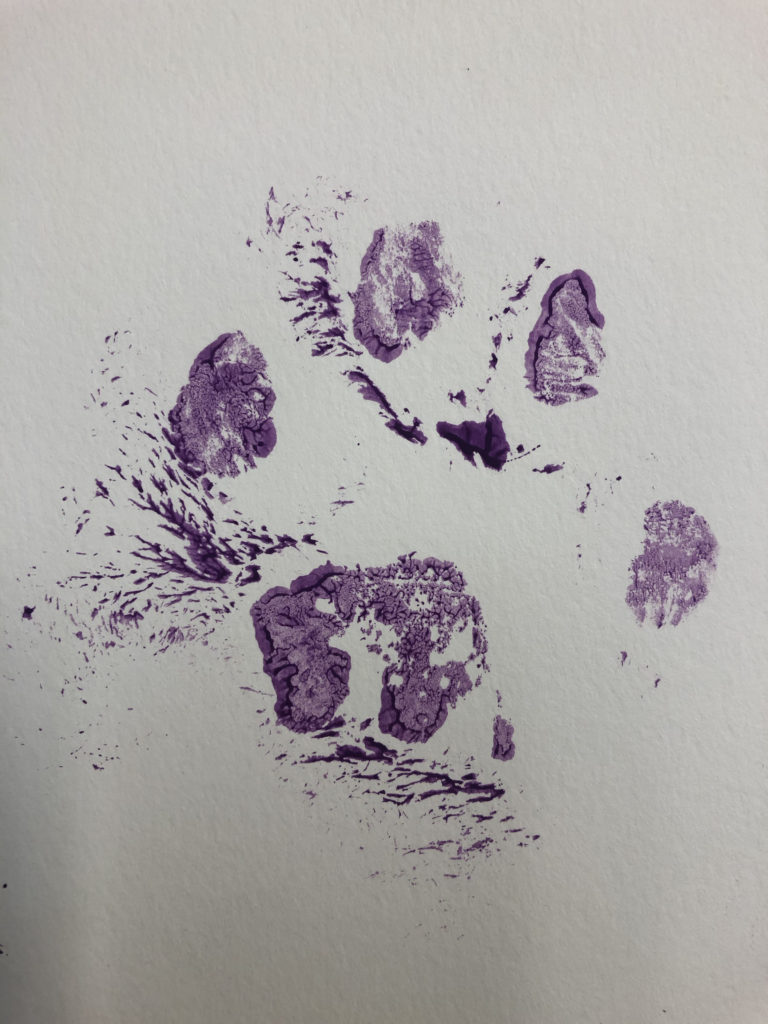 Before the endotracheal tube was removed, Jarrod, Emily, and Colleen had a chance to take a few pawprints from Edward, as well as a clay paw casting. These prints and castings serve as great educational tools for our staff. Many guests who watch our daily Carnivore Feeding show tell stories or have questions about mountain lion tracks they found on their property. We now have actual tracks and prints to show them from Edward! Many people are surprised at how small the prints are. Although mountain lions have rather large paws, what most people don’t realize is that a lot of the paw is muscle. The toe pads (the part that leaves the track) are actually quite small in comparison to the entire paw.

After the procedure was over, the team moved Edward onto the stretcher and back to his transport crate. Colleen removed the endotracheal tube and administered the sedation reversal. Jarrod and Emily quickly moved Edward back inside his transport crate and settled him into a comfortable position for his recovery. The crate was then loaded back into the trailer, and Edward was brought back to his off-display bedroom at the Zoo.

The staff at Animal World & Snake Farm Zoo took turns throughout the rest of the day and night observing Edward to ensure he had a smooth recovery. Edward’s bedroom is equipped with security cameras that are able to be viewed on a phone or tablet. This allowed our staff to constantly monitor his recovery, without having to disturb him in the process. Before midnight, Edward was awake and sternal (able to hold his sternum up and turn his head, which is very important for breathing). Recovery can take a long time for mountain lions, so the team was pleased with his progress.

By the time our staff arrived onsite the following morning, Edward was awake, but less awake than his normal morning self. He remained in his bedroom for the rest of the day so we could keep an eye on his continued progress. By the afternoon, he was acting completely normal and back to his feisty self. 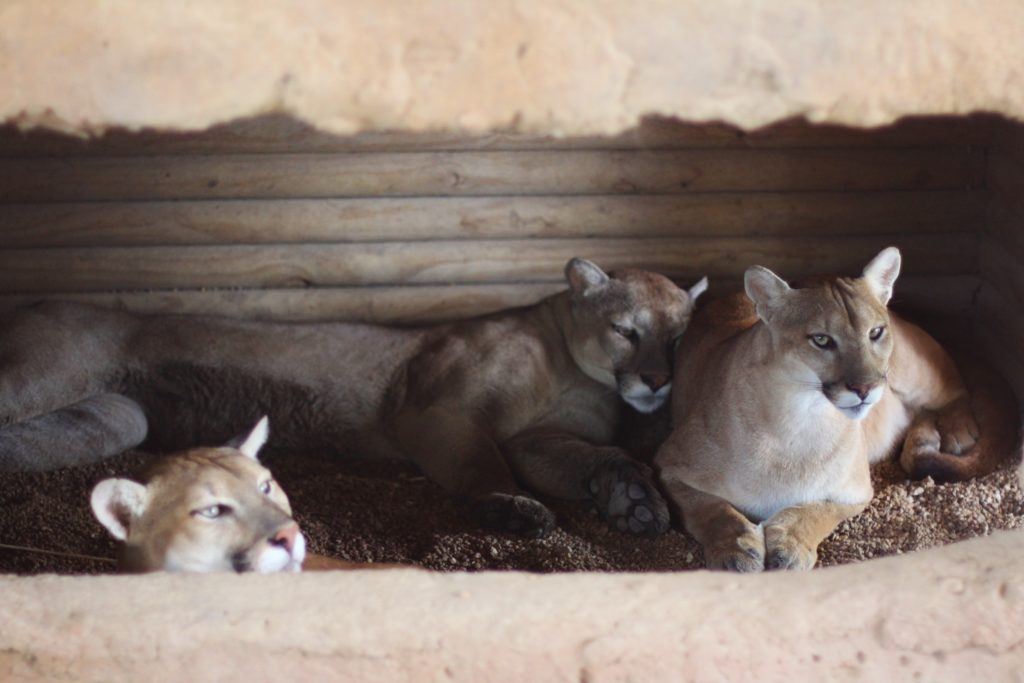 The results of Edward’s exam confirmed what Dr. Rierson had suspected the past two years — Edward has severe arthritis in his elbow. The x-rays were also sent off to a radiologist and a surgeon for further analysis to see if there were any other treatment options for Edward. With the rest of his joints and blood work looking so great for a cat his age, the decision was made to continue his treatment as is. Our animal caretakers continue to monitor Edward’s mobility daily, and are in constant communication with Dr. Rierson about any changes. Although he might not be as agile as he was in his youth, Edward continues to enjoy snuggling with Angel and Sarah on cold winter mornings, a yummy ground turkey treat, and his favorite type of enrichment — Christmas trees! 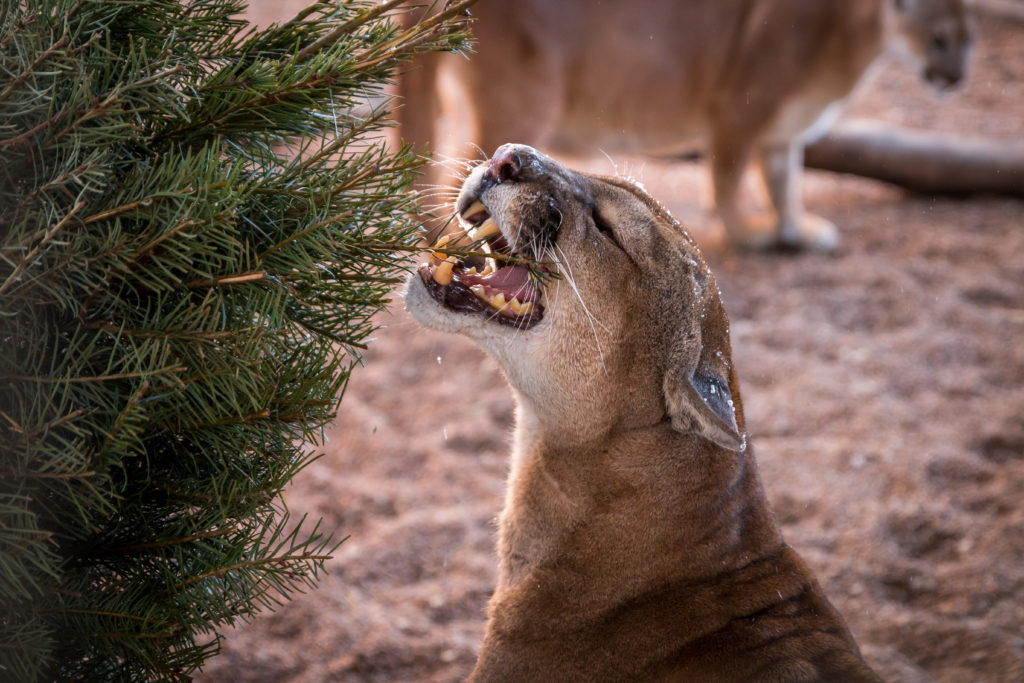 Be sure to come visit Edward and watch him enjoy some Christmas enrichment during our annual Christmas with the Critters event!