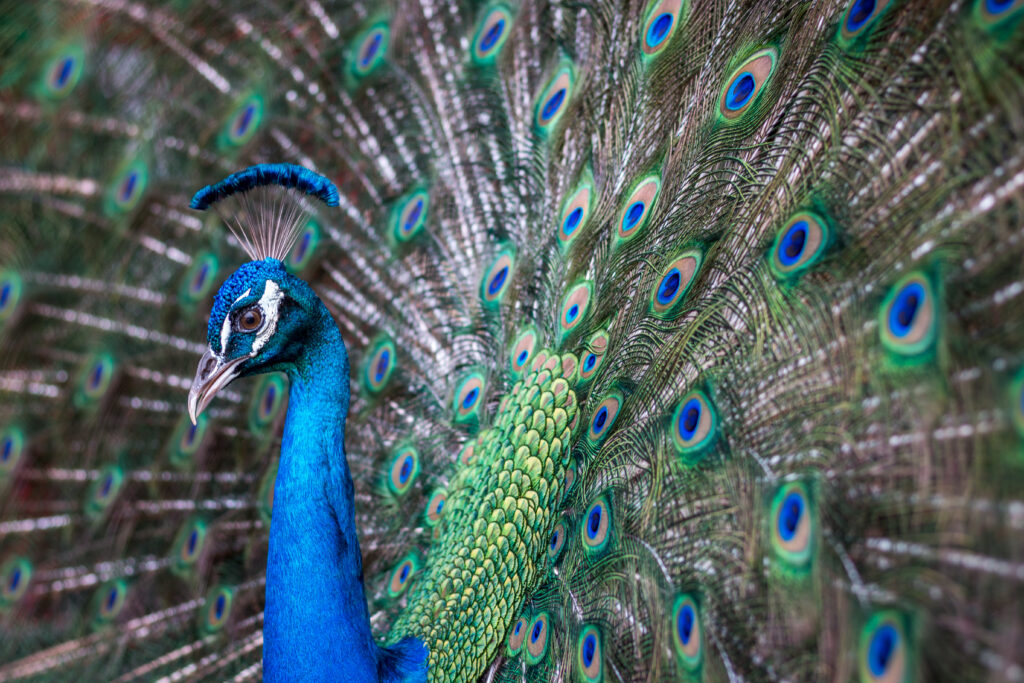 We are proud to announce that we will be featuring the magnificent peacock throughout the month of January! While many of our guests admire them for their beautiful feathers, there is much more to this fascinating animal than meets the eye. Throughout this blog, we will be sharing our favorite peacock animal facts that will hopefully encourage you to appreciate this captivating creature in a whole new light!

Reserve your tickets now to see these stunning animals in person!

Before we dive into some truly unbelievable peacock animal facts, we wanted to share a fun peacock fact that many of our guests are surprised to learn during their visit to the Zoo! Even though they are commonly called peacocks, the correct name for this magnificent bird species is peafowl. Technically speaking, the term “peacock” solely refers to male peafowl, while female peafowl are known as “peahens” and baby peafowl are commonly referred to as “chicks” or “peachicks.” However, since peafowl doesn’t roll off the tongue as nicely, we will primarily be referring to this compelling bird species as “peacocks” throughout this blog post to avoid any further confusion!

Before becoming acquainted with our zoo’s roaming peacocks in person, many of our guests are sure to ask themselves, “What does a peacock sound like?” Since a peacock’s sheer grandeur is sure to leave many speechless, it can be difficult to imagine what sounds these animals use to communicate with one another. Because of this, it can be shocking to learn that peacocks are known among bird lovers for the loud noises they make, which range from high-pitched honks to jarring screams. While it can seem like there is no rhyme or reason as to why peacocks are known for being so noisy, experts believe that peacocks primarily make these noises as a means of asserting dominance over other peacocks.

Now that we have talked about what a peacock sounds like, it is time to share some amazing facts about peacock feathers! For starters, did you know that peacocks are not born with their distinctly vibrant feathers? When they first hatch, baby male and female peafowl actually look identical. Peacocks only begin to develop color in their feathers at the age of 3, and these feathers do not reach their peak vibrancy until peacock individuals are roughly 6 years old. This leads us to one of our favorite peacock animal facts: there is an easy way to tell male and female peafowl apart! While it is widely believed that all peafowl have vibrant feathers, the peafowl is one of many bird species that exhibits sexual dimorphism (or a distinct difference in size or appearance between the sexes of an animal species). For peafowl, this means that only peacocks are uniquely adorned with vibrant tail feathers, whereas peahens bear subtle gray and brown coats. Check out the picture below for a visual comparison of a peacock (left) and a peahen (right)! 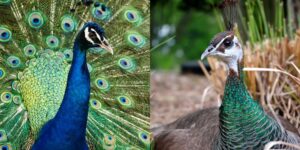 Now, you may be wondering, “Does each type of peacock sound the same?” The short answer is no; just as each peafowl species has a distinct appearance, they also make unique sounds! While the Indian peafowl’s vocalizations are notoriously noisy and high-pitched, the green peafowl makes lower-pitched sounds that sound much more like typical bird calls. Similarly, the Congo peafowl makes sounds that are perhaps best described as a low-pitched, less frequent version of the traditional turkey gobble. While you will only be hearing the Indian peafowl’s distinct vocalizations during your next trip to the Zoo, we hope these compelling facts inspire you to learn more about the less widely known green and Congo peafowl species!

Can a Peacock Fly?

Another question that our knowledgeable staff is commonly asked is a deceptively simple one: “Can a peacock fly?” Even though it can be tempting to assume that a massive plume of peacock feathers would make flight impossible, peacocks can actually fly! With this being said, peacocks are unable to fly for long distances or periods of time. To put this in perspective, it is incredibly rare for a peacock to stay in the air for more than a mile straight. Unlike most bird species but similar to other members of the pheasant family, peacocks will only fly when absolutely necessary. 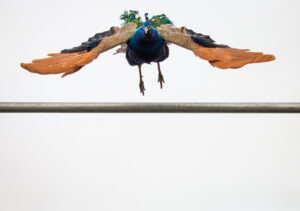 Now that we have shared some fascinating peacock animal facts, it is time to talk about our zoo’s lovely free-roaming peacocks specifically! Even though you may be surprised by what a noisy peacock sounds like, these majestic creatures more than make up for this through their friendly and confident dispositions. These eccentric animals know just how fabulous they are, and are not afraid to flaunt their gorgeous feathers! Since peacocks are anything but modest, you are sure to see them trotting around in all their glory. Be sure to say hi to our phenomenal peacock residents and put your newfound peacock animal knowledge to the test during your next visit to the Zoo!

Stunning Peacock Pictures That Will Make You Appreciate These Flawless Animals Even More!

Our peacocks may be no stranger to admiration and positive attention, but they undoubtedly can’t wait to be appreciated by animal-loving guests like yourself. Meeting a peacock in person can be an unforgettable experience, and we take immense pride in our incredible free-roaming peacocks. In addition to meeting these eccentric animals in person, guests have the opportunity to feed our peacocks by purchasing live mealworm feed at the Zoo! Without further ado, here are some breathtaking peacock pictures to hold you over until you can see these breathtaking creatures in person! 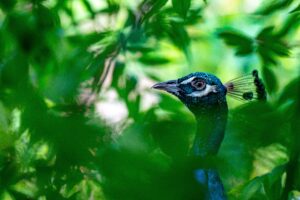 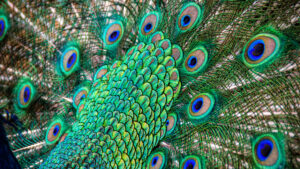