Home Uncategorized A Lesson in Hisssssstory 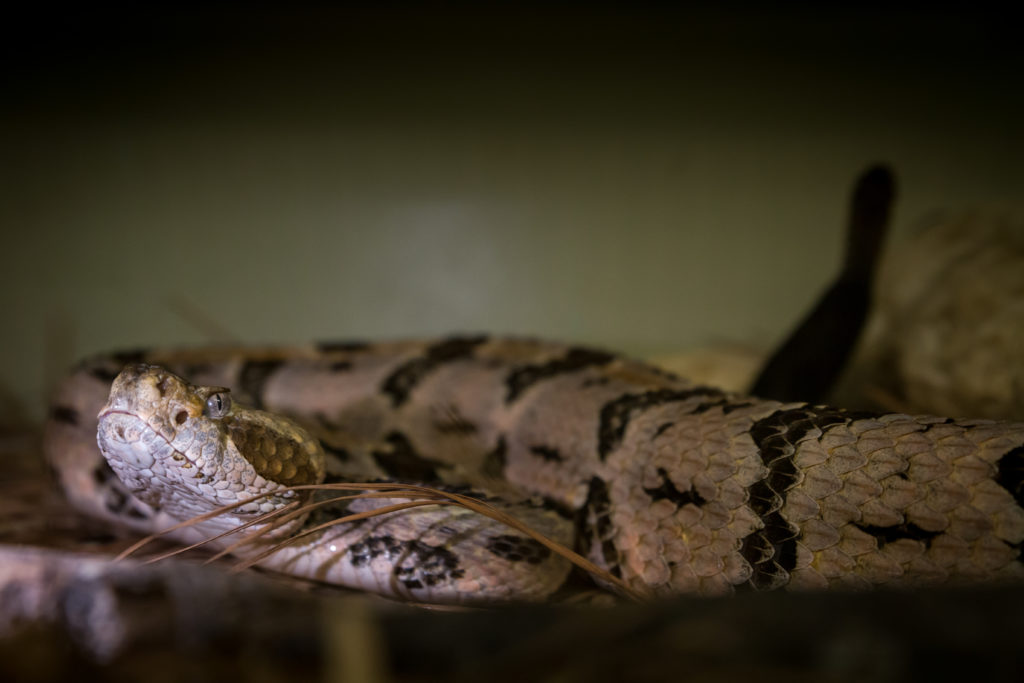 As we begin to celebrate another Independence Day, I am not only reminded of the significance of this date, but I am also conscious of the many forgotten facets of history that helped to build this great nation.

Making my way through the zoo I cannot help but to stop and admire one of the most significant icons that represent our country; the timber rattlesnake. I know what you are thinking. What? A rattlesnake? What does a rattlesnake have to do with the history of the United States?

As a country, our fascination with rattlesnakes began within days of the first explorers stepping foot onto American soil. Soon after our arrival here, reports made their way back to England of the strange and curious inhabitants of this new land. Near the top of this list was a brand-new beast, something of which had never been encountered. Here was a snake, not like any other before. A snake with, well, a bell on its tail! A snake that was not only strange in its appearance, but also at the time, quite dangerous indeed. One must understand that the rattlesnake, although they number over 30 species, is an animal restricted to the New World and thus was totally unique, quite odd, and undoubtedly had to be difficult to explain to the people back in the motherland.

As our country was settled, not only did our new inhabitants learn how to live with this new snake, they learned just how important and revered this snake was within the Native American culture. The “Grandfather of the Forest,” as this snake was known, was well respected by the natives as a protector, a keeper of the knowledge and the need for balance in the surrounding land.

As such, we learned to respect this snake for everything that it was. Wise, patient, tolerant, yet potentially dangerous.

And so it was for many years as we worked to found this new land, create colonies and find our way in our settling of this new country.

Yet, as history tells us, this new country became strong and yearned for its independence from the motherland. This part we know, it is spelled out in our history, and so I shall not rehash a history lesson in politics here, oh no… I am here to tell you about the timber rattlesnake.

As we began to contemplate our independence, years before as a matter of fact, a noted founding father began to not only plant the seed for independence, he also began to write letters to the Colony’s governing bodies. In many of these letters he expressed his admiration for the timber rattlesnake and what he felt it represented. In one letter he penned:

“I recollected that her eye excelled in brightness, that of any other animal, and that she has no eye-lids—She may therefore be esteemed an emblem of vigilance.—She never begins an attack, nor, when once engaged, ever surrenders: She is therefore an emblem of magnanimity and true courage”.

The author? None other than Benjamin Franklin.

Staying true to this symbolism of courage and strength, the rattlesnake made its presence on our first flag of the revolution; the Navy Jack, also known as the Gadston Flag. The snake, along with the works, “Don’t Tread on Me”, warned others that we were a passive nation, but not to be threatened or provoked. The timber rattlesnake again donned a second flag; the now famous “Join or Die” flag. On this flag the rattlesnake can be seen sporting 13 rattles on its tail, representing the 13 colonies of that time.

Later, the timber rattlesnake showed up again, this time featured prominently on the 20-dollar bill in Georgia in 1778.

In today’s ever-changing society, the timber rattlesnake has slowly fallen out of favor. The once celebrated snake is now reviled by many, and renowned by few. It is not surprising, so many of our planet’s most intriguing animals suffer from a positive public relations spokesperson. Over the years they have become misunderstood and surrounded in far too many myths and misconceptions.

Yet, that is exactly our mission here at the zoo. To educate and to bring people closer to understanding and appreciating each and every animal for what it is. Although this snake can be quite dangerous indeed, we urge people to understand that “once you see the snake, it is not a danger”. What this means is simply that if you see a rattlesnake, turn around and walk away. If you are not confronting the snake, not threatening it, you are both safe to go about your daily business. Remember that the benefit of these snakes far outweigh the risks. Aside from being nature’s perfect weapon against disease spreading rodents, scientists are discovering novel proteins in their venom that may one day soon be used to treat heart attacks, strokes and even breast cancer.

The timber rattlesnake is a Texas resident and can be found as far west in Texas as Palmetto State Park. They are a protected animal here in Texas, so remember to look but don’t harass. You are always encouraged to come by Animal World & Snake Farm to see ours up close and personal.

We join you in celebrating this Independence Day, and in remembering how far we have come since that day in 1776. Let us not forget though, just how many unique and iconic species also call this nation their home.

Happy Independence Day to all!